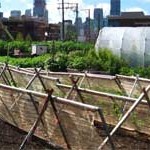 Urban vegetable gardens are starting to appear in cities allowing people to be close to the land and grow their own food. Some city councils and associations have started these vegetable garden projects recently so that the elderly can put their knowledge into something productive that brings a breath of fresh air to the cities; and for young people to learn where food comes from. The projects come in many different forms. Some have decided to divide land or deserted plots into small, single units to be used by one person. In Fuente Olletas, however, a group of people have decided to start a community vegetable garden, a place where everyone can work together for a common goal. Christophe Pouplard belongs to the group which started the project ‘El Caminito’ last May, and explained how the idea became a reality: “Two years ago I proposed the idea to the ‘Málaga Capital Cultural 2016’foundation, but that didn’t go anywhere. Then last May, during the 15-M protests, I met some other people who had launched similar projects, so we have joined forces and concentrated our energies on a plot that has been deserted for years and seemed big enough for the kind of activities we wanted to do”. The plot, which is being developed for planting and sowing soon, is next to San Miguel cemetery, in calle Zurbarán. “We plan to plant a vegetable garden, but we also want to do a lot of different activities. The garden is a pretext to bring nature and natural food to the neighbourhood, but we also want to hold different craft and eco-workshops,” stated Christophe. “Anyyone who wants to offer a workshop or course can do it here for free.”

The plot is owned by the city council, which has been, according to Christophe, very interested and supportive of the project. They were happy to know that there was already a group of people prepared to start working on this space. The city council pays for the work related to setting up the land and also for water, light, a storage container for the tools and some soil to improve the soil profile. “The vegetable garden is self-managed and works as a democratic assembly,” Christophe assured me, explaining that every proposal is voted and approved, and each decision is made together, taking advantage of those who have more knowledge than others in some topics. “There are about 100 people in the group who receive emails and stay informed about what’s happening here, but in the weekly meeting on Wednesdays (at 5 pm) there are between 15 and 20 people,” states Christophe, who has been attending the meetings since May.

Two months ago they held a symbolic opening of the plot to let the neighbourhood know more about the project. That day they planted tree cuttings, lemongrass, and broad beans. “There was a great reception on the opening day, we went down the streets with a batucada, making a lot of noise, and people reacted very well.” Although the project is mainly aimed at people between 15 and 45 years old, children and the elderly have a special importance. Christophe considers that “the elderly feel that they have been uprooted when they had to move to cities to find a job, leaving behind the countryside, so when they find nature so close, a lot of emotions come out”. One of the workshops that has been proposed in the assemblies is called ‘The rescued word’, and Christophe he continued, stating that it is “very interesting to give the floor back to the elderly, because they have many important things to say and because a lot of knowledge and wisdom will go with them. We are not only talking about knowledge of the land, but also culinary and architectural information. We have an inheritance that we are going to lose if we don’t provide a platform for the elderly”. Regarding children, Christophe explained that they have already talked to a group of families of a nearby school who are willing to start planting. The vegetable garden provides a good excuse to get people with common interests together and hold different workshops where people can show each other some knowledge or skill that they have. That’s why Christophe says that they plan to organize “workshops to learn about cooking, building walls using mud and straw…actually, we want to try to get back everything that is being lost. This is a rescue garden”. Christophe concludes by telling me, “The most important thing in this project is that it has a horizontal organization. There is no boss and this lets everyone participate and feel equal. This gives energy to the project.”