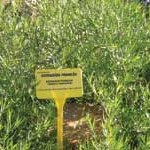 French Tarragon is one of the three muskateers of gourmet cuisine. Despite its name it is originally from the south of Russia, and the form used with its characteristic spicy aniseed aroma is not found in the wild. The plant is a shrub with stems full of small pointed leaves, which disappear in winter to reappear in spring.

The true botanical name is Tarragon Artemisia dracunculus var. odora, and it reaches a height of 70cm. It does not flower, distinguishing it from the non-aromatic version (Artemisia dracunculoides), commonly known as “Russian tarragon”, a much more vigorous and invasive plant. Unfortunately, it is the most commonly found on the market.

The plant prefers light, loamy soil, but in Andalucía, you can grow it in fresh and arid mediums for a short time. It likes both full sun and partial shade and grows well in pots. The ideal growing conditions are found in poor soil (not fertilized) and plenty of sun. Tarragon is a perennial plant that can live for several years, but less in clay soils and wet winters.

In the kitchen, the leaves can be used either fresh or dried, in salads, soups, omelettes and it is the essential ingredient for bearnaise sauce, flavouring vinegar, etc. Heat and drying does not destroy its aroma. The new shoots can be cooked and used as a culinary herb.

Apart from its culinary qualities, Tarragon has medicinal properties and can act as a diuretic, emmenagogue, reduce fever, help with toothache and relieve stomach ache. However, its use is not recommended for pregnant women as it stimulates blood flow in the uturus.