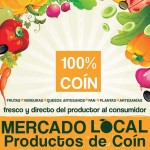 After months of organisation, Coín in Transition’s hard work has finally come to fruition as the weekly local farmers’ market was launched one sunny Sunday in April to help support local producers and invigorate the local economy.

Starting off with over 30 stalls of fresh local produce and crafts, the regular Sunday market, next to La Trocha shopping centre, has already attracted a lot of positive attention from visitors who have enjoyed the chance to buy direct from the producers who all live within the Coín area. The fruit and vegetable stalls have three different ‘grades’ to distinguish between those that are certified organic (productos ecológicos), those that grow ‘naturally’ (productos naturales), that is without chemicals but don’t have a certificate, and conventional growers (productos convencionales). Artists and craftspeople add to the mix of colourful stalls, and reinforce the message behind the market – that regenerating the local economy starts with focusing on developing the local resources of the town – supporting local agriculture and local skills, keeping income from the town in the town, and providing new business opportunities in an otherwise bleak environment.

Ilde Hernandez, who has been the driving force behind the market, explained that there has been a lot of interest from producers, the association already has 60 members signed up, and they already have some ambitious plans to expand the scope of the association by selling to consumer groups on the coast and even opening a factory to make local processed foods like jams and pickles. “We have room at the market for just over 40 stalls,” he said. “And we hope that this is just the start for the association.”

Jose Martin, from Coin in Transition and on the market’s committee, emphasised the point about local economy in a recent debate in Coín’s Casa de la Cultura on alternative economies and solutions to the crisis, saying that from a transition town point of view, local is not only an important feature of the economy but will increasingly become essential to develop less dependence on the global marketplace as peak oil exposes serious problems with our current supply chains.

This entry was posted in Whole Earth and tagged eco living, organic food. Bookmark the permalink.